Soomer won his best result at the opening round in Australia


The World SSP rider Hannes Soomer (Kallio Racing, Yamaha) reached P6 in the opening round of the season in Australia today.

It was the best result so far in the WSSP series for the 22-year-old rider who had previously finished seventh in two rounds.

Soomer started from P12 today. “The start for me was poor and I could have done better in the first few laps. In one of the first laps, I went wide and lost time there,” Soomer said. “But in the second half of the race, I was just as fast as Mahias, Perolari and Cluzel, to whom I was starting to get close. Locatelli was the only one who went far away from the others today."

"This is the first time that I finish in Australia," said Soomer, who retired in Phillip Island in the previous two years. "I can now go to Qatar with a good feeling."

Soomer added that between the warm-up in the morning and the race, the team dared to make a very significant change to the motorcycle, shortening the wheelbase. “In the warm-up, I felt that as the temperature was cooler, the bike got more grip with the fresh tire, but the rear couldn't handle it. Because the feedback from the motorcycle is so clear, we dared to make such a big change before the race,” Soomer explained.

Both Kallio Racing team members made the mandatory pit-stop in the eighth round and both were penalized for acting too fast. The same penalty was the fate today for several other competitors. However, the 3.5 additional seconds allocated to Soomer's time did not change his overall result.

The WSSP series continues on 13-15 March in Qatar. 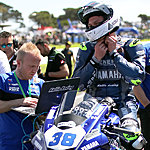